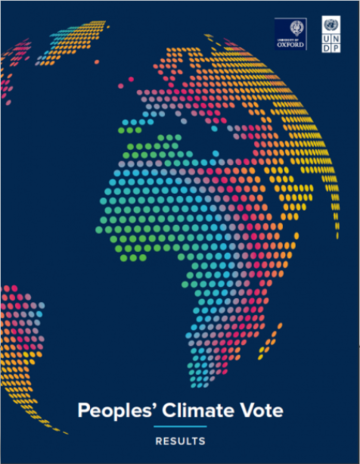 Dr Stephen Fisher, Mr Dan Snow, Ms Martha Kirby and Dr Zack Grant of the Department of Sociology, University of Oxford, were Highly Commended in the 2021 O²RB Excellence in Impact Awards for influencing public and government awareness of climate change attitudes through global media engagement through the Peoples' Climate Vote.

The Peoples' Climate Vote was a research collaboration between the University of Oxford and the United Nations Development Programme and is the largest ever survey of public opinion on climate change, with 1.2 million responses in 50 countries. By highlighting widespread belief in the climate emergency and public support for a broad policy response, the work helped change the global debate on climate change policy at mass and elite levels.

The People’s Climate Vote achieved one of the largest media impacts in the history of UNDP, with over 1,400 news articles across 94 countries in 37 languages, and an estimated 2.4 billion impressions. It was mentioned in tweets from prominent policy makers (including the G7 and COP26 Presidencies) and activists, including Greta Thunberg, as well as in parliaments around the world.

The judges of the O²RB Excellence in Impact Awards panel remarked on the sheer scale of the engagement and the resulting influence on climate change discourse both at both a policy level and amongst the general public.